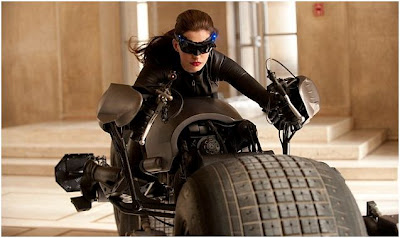 For the dollar movie goer, the waiting-to-rent set, or the wanting to commiserate/commemorate. The third series in Nolan's long-awaited "Dark Knight" Trilogy is slightly ridiculous. Something about how the 7th inning stretches into the 13th and it's East v. West pro-Gotham-anda rivals "Rocky IV" harder than Ivan Drago himself. But the ending? Awesome. Especially if you have a Gotham sized crush on Joseph Gordon-Levitt (guy from "500 Days of Summer") who plays Blake, police officer turned vigilante. From the absurdly grandiose to the politically poignant, "The Dark Knight Rises" rises from its own bat shit and, honestly, kicks some serious mask.

By far, the best 2 halves have to be ... the best 2 pieces of ass. Forgive the objectification. However, Anne Hathaway (Selina/Cat Woman) is so kick-ass, it's okay that she's a hot piece of one. Being, ahem, a progressive woman myself, I don't care if you're the semi-objectified female sex symbol of the film. Ride that bat mobile, baby. Ride it. Just break some prisoner's wrists via cartwheel (Gabby Gold style). And don't forget the smart one-liners.

Gordon-Levitt--{ SPOILER! }--(Blake/Robin) is also hot. Atomically hot. His boyish frame (hot) turned buff 5-oh (also hot) is actually believable. Because his character straddles the tough authoritarian, empathetic humanitarian, and fuck-off vigilante, Gordon-Levitt has the eye gazes and the acting range to pull-off this depth. That 2 riskily cast characters pull off their ass-kicking personas seamlessly (and sexily), seriously gives this film some cred.

And then there's the 13-offs that don't. You can thank 3 of the main characters, 1 of the returning characters, and 2 of the wtf characters for almost half of this. Christian Bale. Hot, too. But is the bat suit's mystique and superpowers contingent upon those 2 delicate lips staying agape? I don't get it. And Cotillard, who plays Miranda, the benefactor-turned-board-member, uses accents like they're underwear. She has one for (almost) every day of the week. I'm confused. Also, Nolan might have infringed upon the rights to "Street Fighter 2". Remember the hulking, pile-driving, U.S.S.R. designee Zangief??? That's Bane, played by Tom Hardy. ...Also hot. But not in this film. Unless suspenders and spider legs are your thing. Which, in that case, I'm confused.

So let's talk Ra's al Ghul. Wha??? Allow me to clarify. Let's talk about Liam Neeson. Or rather, allow me to address him directly. Neeson. How many times in how many films are you going to say the word, "Taken"? Is it a contractual thing? ...Am I going to be taken? We all are? ... Know what. Doesn't matter. You're Liam Neeson. You say it. I believe it. Done.

And now the insignificant, though equally poignant, support cast. Man With Eye speaks English. Be not fooled. Gigantic muscled man with rope? Never climbs the wall. This makes -0 sense.

Setting isn't much more credible. Football stadium full of fans in black & white nestled amongst 3 rivers with a UPMC sign. We are at a Steelers game? ...Ketchuuuuuuuuuuuuuuuuuup!!!!!! Moving on. Gotham city. Only time I’ve ever seen that many buildings in one city is when I lived in Manhattan (one hot second), went to F.A.O. Schwartz during the holidays, & oogled the gigantic Lego displays. So Gotham City's either Lego City, a fun house with mirrors, or every metro area in the Western Hemi, combined. Real-time stadium miming well known team v. fake city on steroids. Got it. But Bane's tanks? They're just stink bugs.

Plot inconsistencies probably take the cake. For instance, how does it take 5 months? Five long, icy months to chalk some buildings and throw some trackers onto the trucks. And, okay, Bathman's MIA. But Fox (Freeman) is still around! He can make the ninja-bat-stars, and the police can throw them at people. But for fuck's sake. If anything, cut that spider-mask off. I promise you--promise--that once that mask comes off, the deep-voiced, head bobbing, collar-popping, megalomanic will stop head butting everyone. Seven innings restore the balance.

More significantly, what is this East v. West rivalry? Cold War ended in 1985. Nearly 30 years ago (this, I know, because I’m a math genius … & was born in 1985), yet "The Dark Knight Rises" still emphasizes those tensions. Sure, Nolan could have been going for the Middle East angle. You see, Bane also resembles this Uzbekestani wrestler who I watched final night of the Olympics. Uzbekistan does straddle both worlds. But audiences just aren't sure. I get the syncretism. Stay true to the comic and parallel current political climates. But NOT with a made up Middle-ish Eastern-ish culture. When closely mirroring distinct cultures, Realism is the only way.

Speaking of the Middle East, I still can't figure out how Wayne gets out. I can suspend my disbelief by believing he's a--The--bat-man. But I cannot for this ridiculous cross-continental travel. Can. Not. Unless he travels by broom stick. Or magic car. Or fireplace. Those I get. Walking/swimming/finding his way to an airport combo. Pfffffft. That (was) Bear Grylls’ territory.

Finally, do not believe everything you see. Or rather, try everything you see Bruce Wayne attempt. Punching slipped disks back into the spinal column and standing in traction using a rope probably won't heal you. ...Probably.

So why should you see it? Or rather, why stick it ou? Nolan & his "Dark Knight" Series always deliver. Grab a snack, maybe. But Stick. It. Out.

For one, I always appreciate "Dark Knight" imagery. Here, particularly the archetypal. See Wayne’s feet dragging & that agonized face full of fuzz? That’s Christ-like imagery. Emphasized, no doubt, by his--{ SPOILER! }--success on the third attempt at jumping that wall to … rise again. (…Like the 3rd fall. Before the resurrection of Christ…) The light v. dark also delivers. Sure, it’s spelled out. But I appreciate the focus on spirituality and the significance of looking inward to fight that which pains. Something like face your Dark side to Rise out of the Knight. But seriously. In as film this grandiose, that a simple story with semi-complex characters can still feel tangible for audiences in meaningful ways, says a lot about the acting & directing.

If nothing else--nothing--Nolan's political commentary, alone, is worth the watch. Orwellian. Freirean. Orwellian. Love. Love. Love. Not like this Hunger Games b.s. where it is just a love story. I mean, love story? Yes. But beyond romantic love. And beyond love, in general. The intricacies intertwined in theme speak volumes to the film’s—and entire Dark Knight Series’—commentary on society which extends far beyond the plot in which it’s embedded. How the oppressed fight the oppressors speaks to humanity & how they become those who oppressed, to humanity’s downfall. (Want more? Pedagogy of the Oppressed. Do it.)

How many bat-stars out of 5?

Okay, so I’m not so much of a math genius. But go see this film. Dollar Theater it. Rent it. Buy it. How ever it is you do it: Watch it. 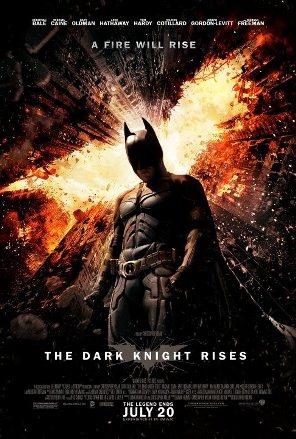