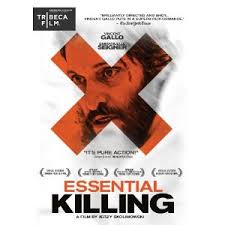 Relentlessly grim, Essential Killing tells the story of a Taliban fighter who is captured by US forces in Afghanistan. After he is captured, he is transported by military vehicle to a “secret detention center in Europe” but there is an accident and he escapes. The remainder of the film chronicles his journey across a snow-covered, unfamiliar landscape (Poland). Vincent Gallo portrays Taliban fighter Mohammed.

There is little dialogue in writer/director Jerzy Skolimowski’s screenplay, and there are no subtitles. When the fighter encounters other people in this desolate landscape, we understand them as well as he does. Essential Killing pits man against man and man against nature, as Mohammad attempts to escape the military, other people who share this unforgiving wilderness (logger, fisherman, hunter), a pack of wild dogs, and the elements. In order to survive, he kills. In one disturbing scene, he pushes a nursing infant away from its mother so that he can partake of her milk.

There is nothing (not even the ending) in Essential Killing designed to make viewers feel good. It is devoid of humor and the only joy is flashed in brief seconds of memory. Killing is a necessary element for survival and morality does not exist.

Essential Killing is a January 24, 2012, release from Tribeca Film, and a prizewinner in the Venice, Toronto, and London film festivals. It is available on digital and DVD; the DVD includes an interview with Jerzy Skolimowski.

Oh…about that warning…throughout Essential Killing dozens of dogs bark frenziedly--military dogs, feral dogs, pet dogs--and although the sound is not overbearing, it drove our three mutts nuts. Since it was a nice day, after 15 minutes of film-watching, I put them outside. It was either that or skip the movie.