Get the CD here:

Filmed at The House of Vans in Brooklyn.

Directed by Jeff Pliskin of Raised Fist Propaganda. Visual effects by Mike Sag.This historic collaboration between Bad Brains and Angelo Moore of Fishbone represents an amazing meeting of the musical minds that probably should have happened two or three decades ago.

These two American architects of reggae/ska's merge with rock/punk remain relevant and continue to evolve in their own paths as musicians. HR and Angelo collaborate regularly on film and at events, however, this is the first official meeting of the two bands on record.

The producer on this track is Miguel (aka Perro Bravo). He is an original producer and performer for Sublime, and continued their legacy through the establishment of Skunk Records and the band Long Beach Dub Allstars.

Throughout the history of reggae music there have been critical moments, when a group of bands have signified a movement forward in the evolution of the genre. In the dawn of reggae, acts like Bob Marley and The Wailers, Jacob Miller and Inner Circle, Joseph Hill and Culture, Black Uhuru, Burning Spear, and countless others laid the foundation for what would forever be known as roots reggae music.

This was the first mainstream introduction of the genre by moguls like Chris Blackwell, who had the vision to give these R&B-inspired bands in Jamaica a rock and roll aesthetic.

The first wave of crossover success had occurred and Jamaica and Rastafari were on the world map as a rebellious spirit within the heart of the Caribbean. In the 80's a new crop of artists defined what the future of reggae in Jamaica would bring, and the emergence of Dancehall ushered in a modern form of reggae with the vocalists now toasting and chatting over riddims as opposed to singing.

Acts like Sugar Minott, Tenor Saw, Johnny Osbourne, and Half Pint, became the new jacks to step out pon di scene. This era also launched the first generation of electronic riddims breaking out of the downtown ghettos in places like King Jammy's Studios. Reggae had once again been transformed and a new sound had evolved, adding yet another complex layer to the musical fabric that makes up the Jamaican lexicon.

The 90's saw an explosion of dancehall-influenced east coast U.S. hip hop artists like KRS One, Busta Rhymes, Notorious B.I.G., and Heavy D, but in Long Beach California, a new band named Sublime had started to express their own ghetto culture and continue in a tradition that many popular rockers had done before.

Artists like Eric Clapton, The Rolling Stones, and to a greater extent The Clash and The Police, had created a whole sound inspired by Jamaican popular music.

This began a parallel musical evolution that early reggae artists, although uneasy with, were incredibly flattered by. Sublime's lead singer Bradley Nowell had an uncanny understanding of the culture, and became one of the first pop acts that didn't just borrow or get inspiration from reggae, but rather helped to progress the genre.

Brad did borrow lyrics and melodies from Jamaican artists, much in the same way they borrow from each other, but by blending his unique expression with ska, rock and hip hop, he set the trend for acts like No Doubt to take the sound to even higher heights after his untimely demise.

Today, the music continues to thrive with a set of new acts, who have brought reggae music full circle. However, unlike in decades past, this evolution is not emanating exclusively from Jamaica.

With our 21st century access to technology, reggae has become a global community, and new styles can emerge from all corners of the globe.

In almost every sub-genre of Reggae music, there is a foreign artist who is making a significant impact. Dub Rockers - Volume 1, which features collaborations between Jamaican acts and other globally-based reggae acts, is a recognition of this reality, and has been a unification process for the community at large.

This album is intended to break down barriers and cross borders. This is the new heart of Reggae, with the sole intention of unity and procreation.

The music has returned to live instrumentation and bands, but has not abandoned the sonic progressions by any of its originators. The artists pay homage to not only roots reggae, but have embraced its often misunderstood offspring, dancehall. 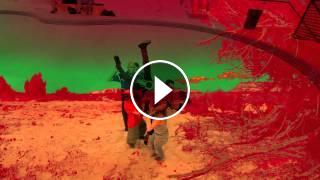