We feel lucky to be able to shoot videos in so many stunning destinations around the state of Utah. Our friends at the Utah Office of Tourism helped introduce us to the unique location we used for this video. We hope you'll Like their Facebook page here http://goo.gl/U7n8oj to learn more about what Utah has to offer.

Story behind the music and the video:
While shooting our video "Lord of the Rings" Steve's steel cello was damaged. When we reattached the fingerboard the strings were too close to the surface and this caused a buzzing sound when plucked. The Sitello was born -- a cross between an Indian sitar and a cello. This sparked an idea. We love incorporating ethnicity into our arrangements -- it helps us keep our music fresh, opens our style to new influences, and helps us appreciate and respect other cultures. (We believe music should be an integral part of the world peace equation!) :-) As we were contemplating an Indian-style cover we happened to sit next to a woman from India on a plane ride home from one of our concert tours. She was excited and recommended several sources for inspiration and ideas, including a very talented artist named Shankar Tucker (http://www.youtube.com/user/TheShrutibox) whose YouTube channel featured a collab with an Indian vocalist named Shweta Subram. Shweta immediately stood out to us -- her smile was so genuine and contagious. She naturally emitted such an amiability in her stage presence that we were drawn to her performance. Her voice effortlessly depicted an Indian classical vibe while still being completely accessible. We contacted her and by the gift of Providence her PR agent was a self-proclaimed "big fan" of ours and had shown Shweta some of our videos just days before.

We selected Swedish House Mafia's tune "Don't You Worry Child" primarily because of its message. We loved the spiritual essence of the chorus -- we agree that Heaven has a plan for everyone and that it's better than any plan we could come up with on our own. As Shweta selected Hindi lyrics for our arrangement she extended this spiritual theme. In fact, the lyrics in the intro come from a traditional Hindi prayer. Our alternative title "Khushnuma" means "happiness" and "no worries." See all the lyrics and their translation here: http://dev2.thepianoguys.com/our-videos/

In writing the music we studied traditional Indian instruments (especially the sitar, the pungi, the tabla, and the tumbak). Among the artists we studied was the legendary Pandit Ravi Shankar and his daughter Anoushka. We began by building the beat you hear in the chorus -- which served as the groundwork for the tune. Then we worked at recreating qualities of the pungi flute, the pitched tabla drum, and the sitar with steel, wood, carbon fiber, and electric cellos. We added piano licks that were inspired by both the traditional Indian scale and the Western Classical style -- blending the two, as we like to do in our music. Shweta's vocals are what truly gave our whole arrangement an authenticity and refined beauty. Her talent and her contribution were inspired.

We'd like to thank the Sri Sri Radha Krsna Temple for letting us film there -- learn more about their temple here:
http://www.utahkrishnas.org/
We'd also like to thank Troy Tasker and Shaun Jeffery for helping us scout out the Little Sahara Dunes and Bryce Payne for loaning us his trailer to make it possible! 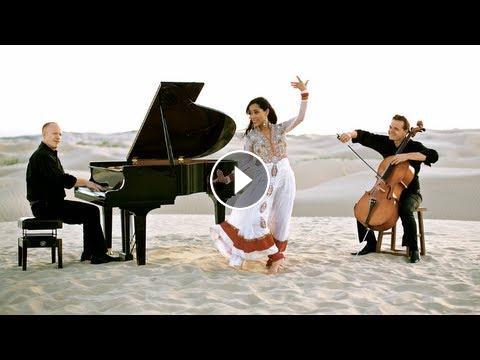